Provoking Pluralism is fundamentally about understanding how religious identities and perceptions lead to intolerance, extremism, and violence in Europe. Presently, we lack a systematic appreciation of historic and contemporary religious xenophobia and misunderstand the fundamental roots of religious animosities between Christians, Muslims, Jews, secularists, and other religious groups. Our religious affiliations – primarily Christian and Muslim – and cultural and nationalistic identities are the problematic origins of our rejection of persons of differing religious beliefs. The future of European religious relations appears uncertain because we have not forecast how our past and present inform our future. We propose a comprehensive research, education, and policy-making endeavor that integrates scholars, government, and the public. Our 42-month and 2.5-million-euro project will address three types of objectives – examining religious difference, provoking civic engagement, and proposing actionable public policies. First, we will research three historical (classical Greece, medieval Spain, and early modern France), three post-modern (contemporary Bulgaria, Greece, and France), and two future (Germany and Belgium in 2050) case studies that assess the state of religious diversity. Second, we provoke European civil society (2 to 3 million persons), especially the young, to participate in productive and challenging virtual religious diversity experiences in Internet video games and online education. We pay especially close attention to the gender dynamics of culture and religion. Third, we offer a religious diversity forecast for Europe and develop specific governmental policies to support better contemporary and future inter-religious relations. The unprecedented theoretical basis of our endeavor is our use of Internet-based video games to educate the public and collect new social science findings about Europeans’ beliefs about religious diversity.

Problem definition: We do not understand how religious identities and perceptions lead to intolerance, extremism, and violence.

There is a societal paralysis taking hold in Europe today. It is poisoning our future because of intense uncertainty and fear about religious difference and violence. The reliability of the late 20th century’s European commitment to religious freedom and diversity seems to be threatened by extremism and the perception of rapid diversification. Newspaper headlines like the New York Times’ “Anne Frank Today is a Syrian Girl” and “London Becomes a Destination for French Jews After Attacks” reflect our inability to extend understanding to old and new victims of religious violence and political instability. Le Monde telegraphs its concern with “Xenophobia without immigrants”. The Guardian expresses it “Muslim population in England and Wales nearly doubles in 10 years”. Der Spiegel offers words of warning – “Interview with Queen Margrethe II of Denmark: ‘I Would Not Say We Are a Multicultural Country’”. The contemporary public is anxious about change because it does not know what to expect. Civil society does not comprehend that its past fuels its present insecurities.

Our understanding of current and future religious diversity is shockingly skewed. A 2015 Pew Research Center study estimated that in 2010 about 74.5% of Europeans identified as Christian, whereas 18.8% were unaffiliated (secularists), and just 5.9% were Muslim and 0.2% Jewish. Pew’s forecast suggests our worries about Muslim and other groups’ immigration is grossly exaggerated. By 2050, Christians will continue to be 65.2% of the population, unaffiliated 23.3%, Muslim 10.2%, Hindus and Buddhists 0.8%, and Jews only 0.2%. If large scale religious diversification is not the root of intolerance, then, what is? It is our attachment to religious affiliations – primarily Christian and Muslim – and cultural and nationalistic identities that are problematic. Especially, those beliefs that reject the intermixing of persons of different origins and beliefs. To confront this religious xenophobia of “us” versus “them” we must engage in an essential study of religious diversity.

Because scholars, public institutions, and the public continue to lack a systematic appreciation of religious intolerance, we misunderstand the fundamental roots of religious animosities, the impact of diversity, and trends in violence. We are highly attentive to cultural changes and these in turn exacerbate our fears. However, there is good reason for hope. Our 21st century is not unique or exceptional. Europe has been here before – and we propose a sweeping endeavor that draws academics, government, and civil society into a deeper research effort (archival studies, Internet education studies, attitude and behavior studies using games) and a transformative experiential learning environment using digital education and video games. Our aim is to provoke pluralism.

Our project seeks to address three types of objectives – research, engagement, and policy. They are:

Provoking Pluralism is a Research and Innovation action project in the topical framework CULT-COOP-05-2017: Religious diversity in Europe – past, present and future. Our approach and our objectives address the work programme because we utilize a systematic process of examining religious differences, provoking civic engagement, and proposing actionable policies. The primary components of our aggressive 2.5 million euro and 42-month project are: 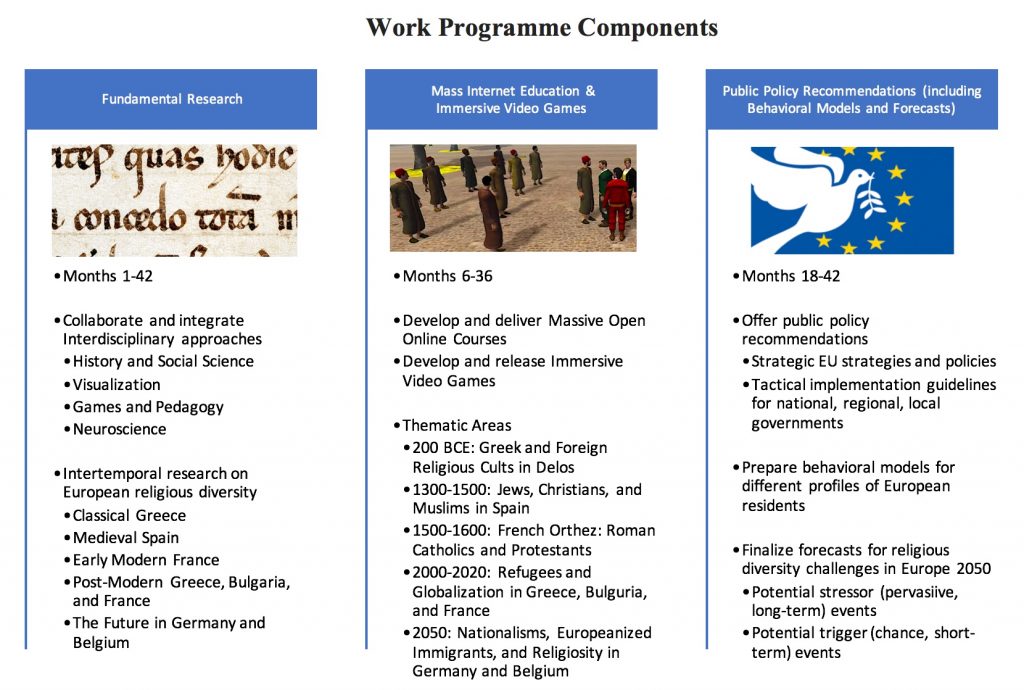 Provoking Pluralism is ground-breaking because it uses novel and mass audience-appealing digital mediums – virtual worlds and games – to encourage civil society to investigate and virtually-reside in many eras of religious and cultural coexistence. It harnesses quantifiable social science findings from virtual gaming scenarios to inform what are the “stressors” and “triggers” of religious antagonisms. Our most significant innovation is the strength of our virtual world and game pedagogy model draws European civil society into the experience of attempting to live, survive, and thrive despite religious difference and tension. To date, video gaming and Internet education have not been used as the primary research tools and public dissemination methods for large scale European projects. CBC Radio Canada and Dr. Ian Bogos of Georgia Institute of Technology describes “empathy gaming”, which is like our work, as the next important development in video games and public education. The only games in-development are modest ones like RIOT-Civil Unrest, which simulates contemporary events like Italy’s NoTAV movement and Spain’s Indignados movement.

The expected impacts of our project directly align with our objectives to address the problem of insufficient religious understanding and the emergence of inter-religious hostilities.

Next
[:en]But, guess what? There’s more important work ahead! On 14 February 2017 the course opens again with a new collection of medieval manuscripts that we will work on together.[:]