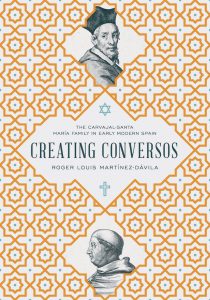 In Creating Conversos, Roger Louis Martínez-Dávila skillfully unravels the complex story of Jews who converted to Catholicism in Spain between the fourteenth and sixteenth centuries, migrated to colonial Mexico and Bolivia during the conquest of the Americas, and assumed prominent church and government positions. Rather than acting as alienated and marginalized subjects, the conversos were able to craft new identities and strategies not just for survival but for prospering in the most adverse circumstances. Martínez-Dávila provides an extensive, elaborately detailed case study of the Carvajal–Santa María clan from its beginnings in late fourteenth-century Castile. By tracing the family ties and intermarriages of the Jewish rabbinic ha-Levi lineage of Burgos, Spain (which became the converso Santa María clan) with the Old Christian Carvajal line of Plasencia, Spain, Martínez-Dávila demonstrates the family’s changing identity, and how the monolithic notions of ethnic and religious disposition were broken down by the group and negotiated anew as they transformed themselves from marginal into mainstream characters at the center of the economies of power in the world they inhabited. They succeeded in rising to the pinnacles of power within the church hierarchy in Spain, even to the point of contesting the succession to the papacy and overseeing the Inquisitorial investigation and execution of extended family members, including Luis de Carvajal “The Younger” and most of his immediate family during the 1590s in Mexico City.

Martínez-Dávila offers a rich panorama of the many forces that shaped the emergence of modern Spain, including tax policies, rivalries among the nobility, and ecclesiastical politics. The extensive genealogical research enriches the historical reconstruction, filling in gaps and illuminating contradictions in standard contemporary narratives. His text is strengthened by many family trees that assist the reader as the threads of political and social relationships are carefully disentangled.

“Creating Conversos represents an important contribution to medieval Spanish social and religious history. Its discussion of two extended and interrelated families, the Old Christian noble family of the Carvajals and the New Christian converso family of the ha-Levi/Santa Marías, breaks new ground in the exploration of the highly contested topic of the identity of the conversos in Spain in late medieval and early modern times. Through an exhaustive use of archival material, genealogical research, and, to a lesser degree, artistic representation, Martínez-Dávila explores a topic that, by its very nature, defies easy explanation.” — Jane Gerber, professor emerita, The Graduate Center, City University of New York